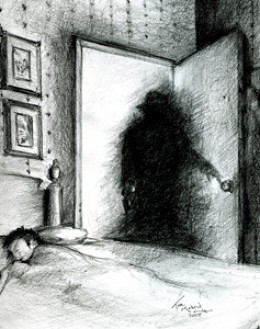 ”“The most frequently asked question I get is what sparked my interest in the supernatural, or why I choose to write the darker side of fiction. Usually I answer with a chuckle, and say something like “Well, it’s all thanks to the ghosts that lived in my basement.”

Here is a full accounting of one particular night when I was eight. To the best of my knowledge, this story is entirely true.

The digital clock radio on the shelf wouldn’t stop flashing the number twelve in big red numbers. I had already set it three times to no avail. This time I finally unplugged it and went back to my chess game. My little eight year old mind didn’t find it odd that the clock continued to flash even without power. It seemed normal. After all I did have that prickly feeling on the back of my neck.

I had had this feeling before and hoped that if I just pretended like it wasn’t there, nothing bad would happen.

I was startled enough to drop the chess piece I was moving when the clock radio clicked on and started blaring an incomprehensible rock song. I got to the clock as quickly as possible and flipped off the radio switch, returning the room to silence.

It’s unplugged, the thought came to my mind.

Don’t thing about it, I argued with myself. Thinking about it always makes it worse.

I turned back to my chess game, but my companion player was nowhere to be seen. An unnerving feeling came over me as I realized I couldn’t remember who I was playing with.

“Are you ready to die?” a domineering mans voice suddenly spilled over the radio speaker. The prickling at the back of my neck moved down my spine and settled in the pit of my stomach.

It isn’t real. The clocks unplugged, I reminded myself, although my mind was already coming up with logical reasons why the clock continued flashing at me.

Sometimes these clocks have a 9-volt battery for backup! I remembered.

I pulled the clock off the shelf and flipped it over, staring into the empty battery compartment. I stole a glance down at the plug, still feet away from the socket.

The mans voice returned, sickeningly sweet, streaming menacingly over the speaker, “Someone is here for you.”

The pit in my stomach exploded into a fury of fear. I felt my skin turn icy. My eyes grew large as I stared at the large red numbers blinking twelve. My head screamed for me to run but me feet felt heavy took a while to respond. I dropped the clock, and ran out of the room, turning back to make sure I wasn’t being followed, only to notice the clock situated perfectly back on the shelf.

I tried the front door but it wouldn’t open even though the locks were visually turned to the unlocked position. I fumbled with the door for a few moments before feeling such a sense of urgency and dread that begged me to keep moving. Staying in one place for too long was dangerous. When I turned away from the door, I caught sight of the basement entryway, the doorway wide, the stairway well lit. Visions of the new compound bow my father had given me flashed in my mind: I had it in my room… my room in the basement.

The thought of the weapon filled me with exuberance, which sat juxtaposed with my fear. I dashed down the staircase in a moment of courage, turning sharply to the left as I reached the bottom step, not daring to look towards any of the other rooms—they all looked dark.

I could see the bow now, leaning against the wall next to my dresser, right where I had left it. It was just a few steps down a small hallway to my open door, and only a few more steps to where the bow would give me a chance against my unknown antagonist. I was through the hallway now, and had taken two steps into the bedroom when I froze.

It’s a trap, my mind echoed forcefully. He led you here.

Don’t think like that. It is always worse when you think like that, I told myself, angry that my mind had started spinning scenarios that might very well materialize at any moment.

But I felt a thought creeping up from the darkest recesses of my mind, and as hard as I tried to block it out I knew it was too late: He’s behind you.

I knew it was true. The hair on my neck bristled as I felt a pair of eyes on my back. I could hear the soft rasp of his breathing. His entire presence was so physical that it overpowered my senses and emotions. I began to cry, feeling hot tears roll down my tender cheeks. The bow was there, with a gleaming arrow just next to it, but I knew I wouldn’t have time to load it. Why was he waiting behind me? What could he possibly want from me?

Maybe he isn’t really there. Maybe nothing is there.

My heart thudded in my chest as a sob escaped my lips. A soft ray of hope pierced my mind, and I turned to look.

I didn’t see anything, because the next scene moved so fast. I was engulfed in blackness, my hope shattered as a cloaked figure overpowered me. I felt a sharp pain, and looked down to see a silver blade sticking out of my stomach. I was so overcome with shock and surprise that I couldn’t even inhale to gasp.

Then I was watching myself. I saw my body sink slowly to the floor. I could see a dark man leaning over me. I felt as if I were floating, watching the scene from above. I could see the man’s face now, a smile of pride stretched his lips. I wondered how murdering an eight year old could give a grown man pleasure. I wondered if the police would ever catch him. Somehow, it made me feel more peaceful thinking that they would.

Ah, peace. I was surprised that I felt peace, but comfort overwhelmed me as the scene below grew dark.

It took a while for me to realize why it was dark: my eyelids were closed.

I opened my eyes to find myself in my room, the soft glow of a night-light in our downstairs hallway cast just enough light to illuminate the familiar surroundings. I was in bed. It was all a dream.

I wondered what time it was, and turned my eight-year-old face to the clock radio on my dresser. I had a sudden feeling that I was sinking as I watched its numbers slowly flashing twelve. The tingling feeling on the back of my neck returned, but immediately moved to the pit of my stomach.

Dear God, I half prayed, half exclaimed, please tell me I woke up.

As if on cue I watched a tall dark figure hesitate momentarily in my doorway then stroll silently to the foot of my bed. I couldn’t make out any features because it appeared as only a silhouette in the dim light.

I did the only thing I could think of to do. I drew in a quick breath, and started to scream.

I was surprised to realize I survived the long few moments it took for my mother to reach my bedside. “There’s someone here, there’s someone here,” was all I could repeat, her frightened eyes turning soft as I recounted the story of my nightmare and the events that followed.

“You were still asleep,” she told me, holding me, and she almost had me convinced.

My two sisters, wakened by the screaming, were also standing in my room. My little five-year-old sister’s eyes brimmed with tears.

I remember my mom searching the house that night with my dads loaded pistol tucked behind her back while the three of us were huddled together in my sister’s room. I wasn’t about to stay in my own room.

The next morning we sat down as a family and discussed the “other” family that shared our home: a father, a mother, and a little boy. Each one of us had seen or heard a member of the family, but thought we were imagining things. It wasn’t until we gathered together to discuss our experiences as a family that we started to connect the dots.

“For a long time I though you had gotten out of bed and were running up and down the hall laughing,” my mother recounted.

“And my friend and I saw a woman in your bedroom mirror, mom,” my little sister added, the story recalling a memory from when she and her friend had run up the stairs with fear in her eyes, telling of a woman in a flowing white dress.

“I thought it was dad coming home late at night and walking around the basement,” my older sister said, “but the man I saw never made a sound.”

“So you can imagine a father, with a son of his own,” my mother turned to address me. “I’m sure he felt the need to come into your room to comfort you after your nightmare.”

Eight years these experiences had occurred in our home, each of us thinking we had seen nothing more than a shadow mixed with a flicker of imagination. Eight years we remained silent, my mother getting out of bed to chase a child she thought was me only to find me fast asleep in bed. Eight years this family had shared our house, and we refused to acknowledge them.

A few weeks later my mom woke to the sound of a child laughing in the hallway. She sat up, and clenched the blanket around her.

“If you can hear me,” she said, “you really scared my son. I realize you must have work to do, and you are welcome to stay as long as you need, but please, finish your work and move on.”

Perhaps all they wanted was to be remembered, because two weeks later, they had gone.